The Macquarie Dictionary was first published in print in 1981 and has been online since 2003. Its reputation has gone from strength to strength and it is now nationally and internationally regarded as the standard reference on Australian English. 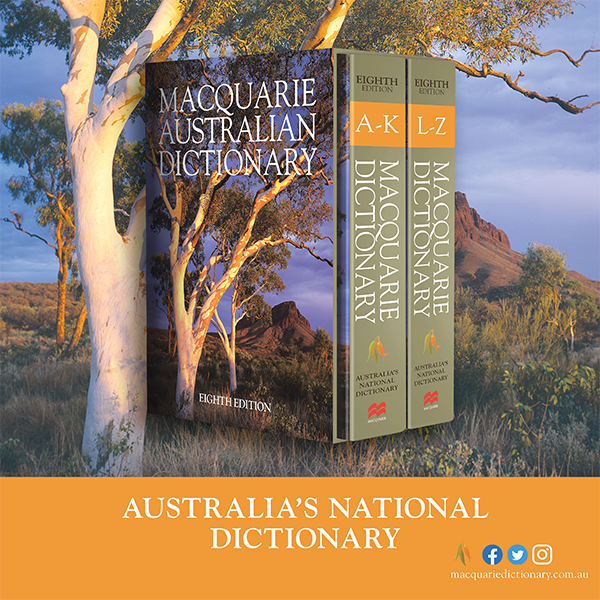 Since the Macquarie Dictionary was first published in 1981, its reputation as Australia's national dictionary has gone from strength to strength. It is now nationally and internationally regarded as the standard reference on Australian English. A comprehensive and up-to-date account of our variety of English, it not only includes all those words and senses peculiar to Australian English, but also those common to the whole English-speaking world.

The Macquarie Dictionary Eighth Edition is nationally and internationally regarded as the standard reference on Australian English. An up-to-date account of our variety of English, it not only includes words and senses peculiar to Australian English, but also those common to the whole English-speaking world.

The Macquarie Dictionary was first published in 1981 after a decade of research and planning. Amid much praise from such notable figures as Manning Clark, Thomas Keneally and others, the dictionary established a firm footing in Australian culture as Australians responded warmly to the idea of having their own national dictionary.

In the words of Professor Manning Clark at the launch in 1981 when speaking of the Macquarie Dictionary First Edition:

...as this dictionary shows, we also speak and write in our own way. We’ve always had our own pronunciations since about the 1820s and 1830s. For nearly a hundred years we’ve apologised for it, but I welcome this Australian Dictionary because Australian English is one of the great loves of my life.

Since 1981, a whole family of dictionaries and thesauruses have been developed from the original database. This was followed by the second edition of the complete dictionary which was published in 1991, introducing encyclopedic entries for people, places and events to the headword list.

In 1997 the third edition was published, building on the work of the previous two, and incorporating the many changes that had occurred in the Australian language since 1981. Of special interest was the range of items from the Englishes of South-East Asia, many of which made their appearance in a general dictionary for the first time. The third edition also saw the inclusion of thousands of citations drawn from Australian literature, using Macquarie's extensive language database, OzCorp.

In 2005 the fourth edition was published with expanded citations and with the origins of phrases given. Like previous editions, it included the many new words that had appeared in Australian English in a broad spectrum ranging from the international to the uniquely Australian.

The fifth edition was published in October 2009. In addition to updates of the headword list, this edition responded to the community's wish to engage with the debate on the environment by revising and expanding its coverage of environmental terms.

The sixth edition was published in October 2013. Aside from hundreds of new entries and senses, this edition also features words, both formal and informal, that date back to the Australian military experience of World War I.

The seventh edition was published in March 2017. This edition reflects the increasing influence that technology, the internet and social media has had on us as a society.

The eighth edition was published in July 2020. You can find out more in the Eighth Edition tab.

Macquarie sets the standard for English in Australia and can now be regarded as an Australian tradition. Our history is reflected in our language, and so the dictionary has the role of being a faithful record of our language choices. In addition it is an up to date language reference for contemporary words giving their spellings, pronunciations, meanings, origins and usage - all in the context of Australian English.

Our language is close to our hearts and so the Macquarie Dictionary has become an icon of Australian culture.