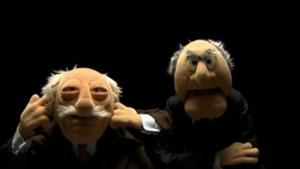 This word has such an interesting shape and sound that it seems that, as we lose track of its original use, it is getting a good feel to it. ‘Such a curmudgeon!’ you say with admiration as the grand old man stumps into the room with a huge frown on his face, formidable and commanding respect.

When it began its life in the mid-1500s, the word had a much darker hue.  Dr Johnson recorded curmudgeon in his dictionary and said that it meant ‘an avaricious churlish fellow; a miser; a niggard’.

Its origin is not known, which has made it, over the centuries, all the more interesting to speculate on an etymology. An anonymous correspondent of Dr Johnson suggested that it came from the French méchant coeur, literally, ‘wicked heart’.  This is regarded as ingenious but totally fanciful.

Almost as fanciful is the suggestion (made in 1600) that it was a blended form of corn mudgin. Mudgin being from an Old French word mucier ‘to hide away’. A corn mudgin was someone who concealed their corn from you so that they could keep it all to themselves.

The idea that it is somehow related to cur ‘a dog of low breeding’ is more reasonable, that being used as an epithet for an unpleasant person.