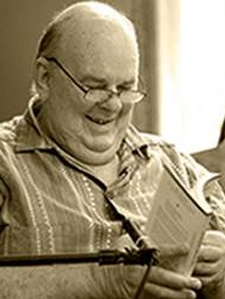 It is not widely known that Les Murray, regarded as one of Australia’s greatest poets, is also a dictionary editor by enthusiasm, having contributed to Macquarie Dictionary in an informal and formal status for many years.  As Editor I have a collection of postcards from Les in which he brings my attention to lexical items worthy of inclusion in the dictionary ranging from details of rural life at Bunya (a small town in NSW where Les lives) to an assortment of items encountered in his travels. Les is now a Fellow of Sydney University attached to the dictionary where he looks at special areas of Australian English such as Aboriginal English and its overlap with rural Australian English, borrowings from American English from colonial times, and more recently the jargon of horseracing.

Les Murray will be back at Fisher Library for readings from his collections of poetry later this month.

He will read some old favourites and a number of new poems from a book in the making.

All are invited to attend this free event and light refreshments will be provided. This is a popular event and seats are limited so book early to avoid disappointment.