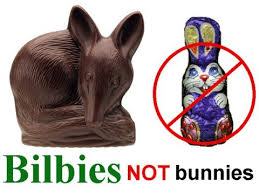 The word Easter comes from a Germanic word present in various forms in different Germanic languages but ultimately coming from the word for ‘the dawn’. The Venerable Bede recounts in 735 that it was the name of a goddess celebrated by the Anglo-Saxons at the vernal equinox, this pagan celebration being taken over by the Christians. There is no other verification for this story so it stands as unproven hypothesis.

The original bringer of Easter eggs was the European hare, regarded as a symbol of fertility. Both hares and rabbits produce many litters in spring and have the physiological ability to become pregnant with the next litter while still carrying the first one. They breed like rabbits. The hare was thought in medieval times to be a hermaphrodite, not requiring fertilisation by another male to become impregnated. Because of this virgin birth reputation it was a symbol for Mary and was popular in Church iconography.

This story of the hare bringing Easter eggs was taken to the New World by the Pennsylvanian Dutch. Somehow in the translation the bunny supplanted the hare.

Now we come to the Easter bilby, whose rise to fame began with a 9-year-old writer, Rose-Marie Dusting whose story Billy the Aussie Easter Bilby, written in 1968 and published 11 years later, helped to save the bilby from extinction. In 1991 the Foundation for Rabbit-Free Australia gave a twist to this story which they thought might help in the fight against the rabbit. For this to be successful we had to stop regarding the bunny as something cute and cuddly. In this version of the Easter bilby story he eventually succeeds in delivering the Easter eggs but only after fighting off the evil rabbit army. Up with the bilby and down with the rabbit. Perhaps next year we will have chocolate versions of Prince George meeting the Easter bilby to carry on the tale.