London to a brick 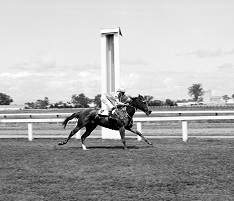 In the folklore of Australian English this phrase is associated with Ken Howard, a race caller of the 1940s. The notion is that the punter is so confident of winning the bet that he is prepared to put all of London on the horse to win one brick. These are very short odds indeed. The phrase is, more correctly, London to a brick on, that is, you are placing London as your bet on a horse to win one brick.

The wonderful resource that is Trove at the National Library can now give the dictionary editor citations from digitised newspapers not available to us in the past – or, at least, not easily available. Using Trove we find that the earliest citation is in fact The Riverine Grazier of 1917:

The Shorts Handicap was responsible for Mr T. J. Mathews’ Carbinier gelding Carcoo adding another victory to his credit from Veluvezoom. Had the latter got away on even terms with the winner it would have been London to a brick on the mare; as it was she lost many lengths, and was then only beaten by a short head.

But wait – there’s more. It seems that the phrase appeared in the UK before that. A report of a boxing match published in 1825 has the citation ‘a Cockney called out “all London to a brick!”’

Once the phrase crossed into Australian English it lined up with the existing colloquialism of a brick meaning ‘a ten-pound note’ – from the colour of the note. The visual image of all the bricks of London on one side and one solitary brick on the other became a punning reference to the brick as money.

Then Ken Howard popularised the phrase to the extent that many people believe now that he coined it.

To place the phrase in its historical context is not to detract from his skill and fame as a race caller.