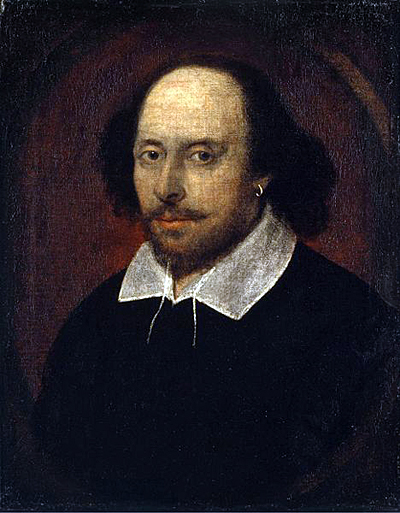 Two antiquarian booksellers in New York believe that they have the dictionary which Shakespeare used* and that, following his annotations, they can track various words and phrases he used in his plays.

The starting point is the dictionary called An Alvearie or Quadruple Dictionaire, written by John Baret and published in 1580. Baret was a teacher who kept a record of all his students’ efforts in translating English into Greek and Latin, and then into French. The aim of a good education at that point was to give students a command of the Classical languages. The addition of French would be because French was then a prestige language whereas English was not.

The name Alvearie comes from the Latin alvearium a hollow vessel swelling out in the middle and thus, a beehive. Baret’s notion seems to be that the students were like busy bees in collecting the material that he used in the book. A dictionary at that point was more a word list or glossary, usually with the equivalent term in another language. This book fleshed out the meaning of the English words and added phrases and other interesting bits and pieces of information, as well as giving the equivalents in three other languages, thus becoming the ‘quadruple’ dictionary.

A number of these illustrative phrases have found their way into Shakespeare’s plays. The booksellers believe that while no single example proves their case, the weight of numbers of these examples does.

I will leave it to others to test the truth of their theory. It is plausible that Shakespeare might have used such a book as a language textbook in his own schooling. But the dates don’t seem to add up. Shakespeare started at the local school when he was seven or eight – so 1571 or 1572. He left when he was thirteen – so about 1578. Baret’s dictionary wasn’t published until 1580, by which time Shakespeare was on his way to being an actor and probably not consulting a Latin/Greek/French glossary very much.

There is a popular feeling that Shakespeare contributed greatly to the English lexicon, a theory which is probably overblown. Many of the words attributed to him occur in citations that predate his plays. It is true, however, that he manipulated the language in surprising ways, turning nouns into verbs and verbs into nouns to make lines that read better. Some words which have their first citation in the plays may well have been common enough at the time, but, particularly in the case of colloquial words, simply not written down anywhere else at that point. It is also true that Shakespeare had a fancy for odd and arcane words, a habit which may well come from devouring a dictionary.

Given this view that Shakespeare was writing the dictionary, so to speak, it is refreshing to believe that he was also consulting the dictionary of his day, and that, like us, he needed a language reference at his side.

So who can say? We await the next instalment from the Shakespeare experts.