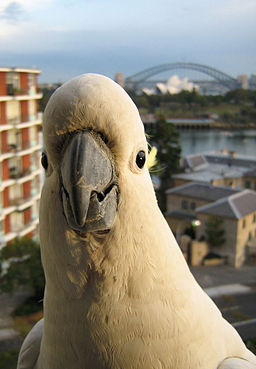 Folklore has it that the cockatoo farmer got his name from scratching for a living in the dirt like a cockatoo after seed. Cockatoo farmers had very few possessions – a few cows, a bullock team, a bark hut was typical.

The true story is even more interesting. A Cockatoo was a convict serving a sentence on Cockatoo Island, an island in the middle of Sydney Harbour. Mostly they were convicts who had re-offended in the colonies. The Sydney Morning Herald of 1845 reported that 'The total number of prisoners on Cockatoo Island under sentence yesterday was two hundred and fifty three'.

There was a scheme to take a number of these Cockatoo Islanders and start a new settlement described as ‘a special survey’ at Port Fairy in Victoria. They were referred to as Cockatoo settlers, and, by all accounts, faced a rough start to their enterprise. In 1844 the farms near the township were washed out and the grain which had largely been sown was destroyed. But they soldiered on, it seems, and some of their number went across to Launceston.

It is possible to find reports of cockatoo settlers and cockatoo farmers throughout Victoria and Tasmania through the early part of the 1800s. The gold rush took the term further north so that it appears in Goulburn, the Hunter Valley and eventually the Darling Downs and Queensland.

It seems to have been widely adopted quite quickly and to have lost its association with convicts. Rather it became the term employed to contrast small farmers with the squattocracy. This letter to The Argus published in 1857 begins:

SIR, I am, what in this, her Majesty’s fine colony of Victoria, is commonly called “A Cockatoo farmer.”

… in both Houses of Parliament, the wants of the cockatoo farmer and the intending settler appear to be so little known, or wilfully disregarded, that I would prescribe to our noble legislators the actual experiment of entering on a new piece of land, with no great superfluity of cash, and a team of bullocks or horses, and half a dozen cows.

Perhaps when sheep would swarm round them thick as bees; when one half of their cattle would be lost, and the other half nearly starved to death; when, after hunting over hundreds of miles, their last shilling would go in replacing those that are lost; when, living in a miserable shanty, sparely fed and overworked, they would feel that at any time the squatter can ruin them by impounding: then, perhaps, I say, our noble legislators (if their hearts would not break before going through half their lessons) would know afterwards the greatest want of the cockatoo to be “grazing, grazing, grazing!”

Doesn't sound right to me. Watching cockies in my back yard with one sits up high to keep a watch out while the others drink (Magpies do it too) made me think of farmer sitting up on higher ground keeping a watch out on herd, flock. A dairy farmer is called a cow cockie. It seems like it is all to do with being in the role of the protecting watchful sentry.