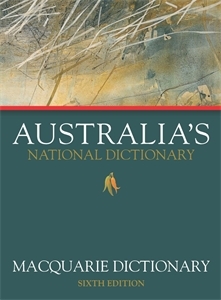 The new Sixth Edition is here!

The cultural items present on every page of the big green book are not merely facts occupying their proper spaces in the text, but supporters of each other, fine-tuning a picture of the nation as a mental habitat consistent with itself and with Australian experience over the two centuries since European settlement.
– Les Murray

Since the Macquarie Dictionary was first published in 1981, its reputation as Australia’s national dictionary has gone from strength to strength. It is now nationally and internationally regarded as the standard reference on Australian English. A comprehensive and up-to-date account of our variety of English, it not only includes all those words and senses peculiar to Australian English, but also those common to the whole English-speaking world.