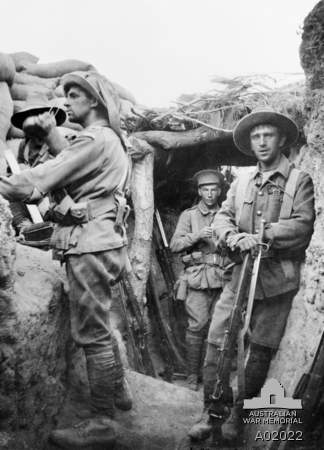 a soldier from Australia or New Zealand. Originally referred only to Gallipoli campaigners, (the Australian and New Zealand Army Corps), then to all World War I soldiers, and later extended to any Aussie or Kiwi soldiers. It is interesting to note that at the time the word first came about (1915) acronyms were very scarce things. It was the telegraphers who first started to use the shorthand ANZAC. The troops quickly picked the term up and started using it to refer to themselves and to coin names for things in their immediate surrounds, as the Anzac button, a bent nail used as a button substitute, Anzac soup, a shell hole polluted by a corpse, Anzac stew, boiled water with a single bacon rind, and Anzac wafer, a hard biscuit issued instead of bread – 'one of the most durable materials used in the war'. On a more positive note we have the term Anzac spirit or the spirit of Anzac, in other words, courage, tenacity and sacrifice.