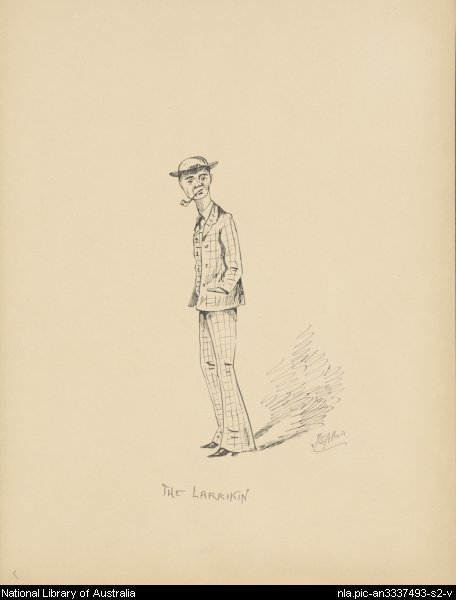 Words of cultural significance in Australian English can be words which reflect a national character like larrikin and ratbag.

A larrikin in the late 1800s was described as follows in a book called Jonah by Louis Stone:

They were dressed in the height of larrikin fashion -- tight-fitting suits of dark cloth, soft black felt hats, and soft white shirts with new black mufflers round their necks in place of collars -- for the larrikin taste in dress runs to a surprising neatness. But their boots were remarkable, fitting like a glove, with high heels and a wonderful ornament of perforated toe-caps and brass eyelet-holes on the uppers.

There were larrikins in both Sydney (Darlo and the Rocks) and Melbourne (Collingwood). They were also usually on the wrong side of the law – the hoodlums of their day.

What do you think, do we still admire larrikins and avoid ratbags?

(Image courtesy of the National Library of Australia)