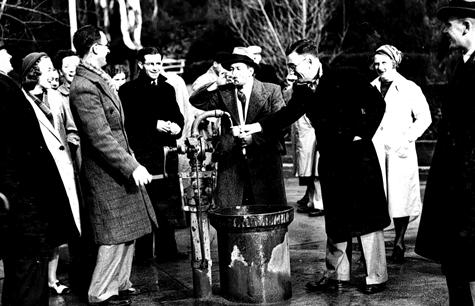 What does it mean to be 'under the pump'?

It seems that the story begins in merry England with the village pump. There is an account in The Pickwick Papers where Mr Pickwick is almost put under the pump until Sam Weller rescues him.

Colonial Australia also had public pumps where people could have a wash or cool down. But this facility was then used frequently to sober up people who were drunk, not uncommonly to quiet down people who were unruly or violent, and occasionally to extract information from people who were reluctant to give it. For any of these reasons you could be put under the pump.

By the 1860s in Australia the phrase ‘put under the pump’ was being used figuratively in the sense of being severely criticised or disparaged. It was the equivalent of pouring cold water over something but with a bit more intensity.

Then there was the curious use of the phrase ‘Don’t put him under the pump’, an exhortation which is evident from the 1880s to the early 1900s. This was a call to others to do exactly that, put the victim under the literal pump, but phrased so as technically not to be inciting violence. There is the story of the university professor watching his students laying into an undergraduate they considered had done something reprehensible. ‘Don’t put him under the pump’ cries the professor from his window. ‘Good idea’ they say and carry off the offending student to do just that. Again this phrase was referred to in other contexts. It almost had the sense of ‘I say one thing but I mean another’.

By the 1950s we get ‘under the pump’ meaning ‘under some kind of pressure’. In one citation it is pressure from creditors but the pressure could be felt in law, politics, or domestic circumstances. With the disappearance of the actual pump, all that remained was the figurative use.

From the late 1990s it became a cliché of sporting commentary.