A wongi about Australian Word Map 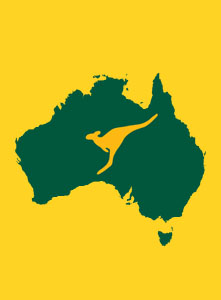 Australian Word Map is a small treasure on offer at the Macquarie Dictionary website. It was set up by the ABC and Macquarie Dictionary as an interactive site to collect and record words and expressions from all over Australia. Thousands of people contributed, and the resulting database is a rich storehouse of Australian regionalisms. Part of the appeal and unique character of Australian Word Map is the bank of comments made by contributors which are listed below the definitions like the one below.

Kirup syrup
Western Australia
homemade grappa sold at $5 a flagon
[named after the town of Kirup, south of Perth, where the red wine in the Italian style was made]

So, what is a regionalism?

It's a word, phrase or expression used by a particular community in particular parts of the country. Australian English has two classes of regional words. For some items, speakers must use a regional term because there is no word that is used all over Australia. For example, there is no word used everywhere in Australia for the type of sausage known variously as Belgium sausage, Byron sausage, devon, Empire sausage, fritz, German sausage, luncheon sausage, polony, Strasburg, and Windsor sausage.

On the Word Map page you can click on the map to find the words used in that region, the regions being set by Macquarie in accordance with maps of patterns of settlement in Australia. 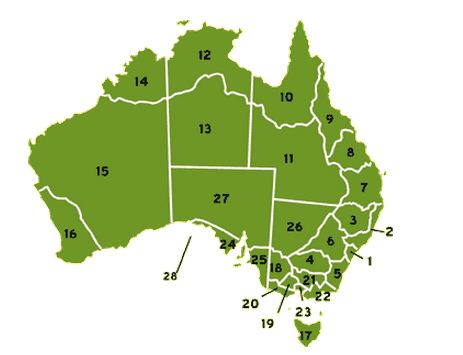 Other examples are chonks for ‘lollies’ from Victoria, treddly for a ‘pushbike’ from South Australia, and North Island for ‘the mainland’ from Tasmania.

Various words for swimsuits are the familiar stuff of Australian regionalism – bathers from Victoria and South Australia to Western Australia, cossie in NSW, and togs or swimming togs in Queensland. Speedos for men seem to have come in for special attention – sluggos in NSW, ballhuggers in Perth and dick togs or D.T.s in Queensland. These are of course now well-known as the budgie smugglers.

But the delight of Word Map is that it goes beyond this to undiscovered items like wongi – ‘a chat’ from WA (ultimately from an Aboriginal language), pimply squash – ‘a thick-skinned gourd covered with bumps’, apparently not known south of Newcastle, and snot-block – ‘a vanilla slice’. I couldn’t quite believe this last one, but I have been assured by a number of Victorians that it is perfectly correct, although they concede it is possibly a term more popular with males than females.

You need to remember the limits of this collection. It is not a collection of slang although there is some overlap. Some regional items are not colloquial. Much of the material has been rewritten into the Macquarie Dictionary, but not all because in some cases there was not sufficient evidence, or they are, while amusing or interesting, not strictly speaking dictionary entries. So if cruising through Word Map reminds you of something that ought to be recorded, make sure you check it in the dictionary before you post it as a missing item.

A word of warning about ‘taboo’ words

In the Macquarie Dictionary, words which are considered by some as taboo, derogratory or racist are clearly labelled (see: restrictive lables) to indicate this status. However, this practice has not been adopted in Australian Word Map because the vast majority of the data has been contributed by readers, and we felt it was important to retain the original tone of the material by not applying too much editorial comment.

How to search the Word Map

To search for regionalisms, either type your inquiry into the search bar or click anywhere on the map to highlight a geographic region of your choice. If your search is successful you will then see a page listing the regionalisms. If you are looking for a phrase or compound which includes a particular word, try adding a question mark, ?, before and after the term, eg. ?sausage?.