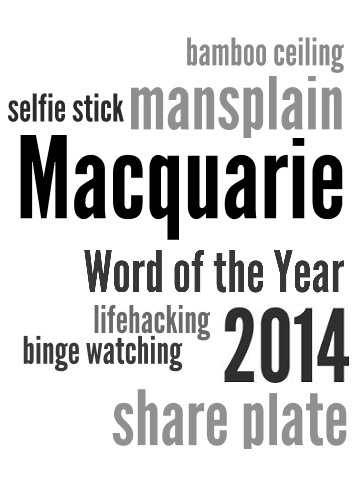 The results are in and the winning words for 2014 have been decided!

The winner of the Committee’s Choice is …

verb (t) Colloquial (humorous) (of a man) to explain (something) to a woman, in a way that is patronising because it assumes that a woman will be ignorant of the subject matter.
[MAN + (EX)PLAIN with s inserted to create a pronunciation link with explain]
–mansplaining, noun

The Committee would like to give honourable mention to lifehacking, binge watching and bamboo ceiling.

A dishonourable mention to selfie stick for being inescapable.

The Committee chose mansplain as the word of the year for 2014. They felt that it was a much needed word and it was a clever coinage which captured neatly the concept of the patronising explanation offered only too frequently by some men to women.

The People’s Choice winner is …

noun a serving in a restaurant designed as multiple small portions so that several diners can share the same dish.

The runners-up are lifehacking, binge watching and selfie stick.

Check out some of the media coverage in response to the choice of mansplain:

Mansplain is Australian Word of the Year | Nancy Groves | The Guardian

'Mansplaining': What it is and why it's in the dictionary | Lucia Osborne-Crowley | Women's Agenda

How does Macquarie Dictionary’s Word of the Year stack up against Oxford’s Vape? | Laura Close |Business Review Australia

Or you can download the full media release below.