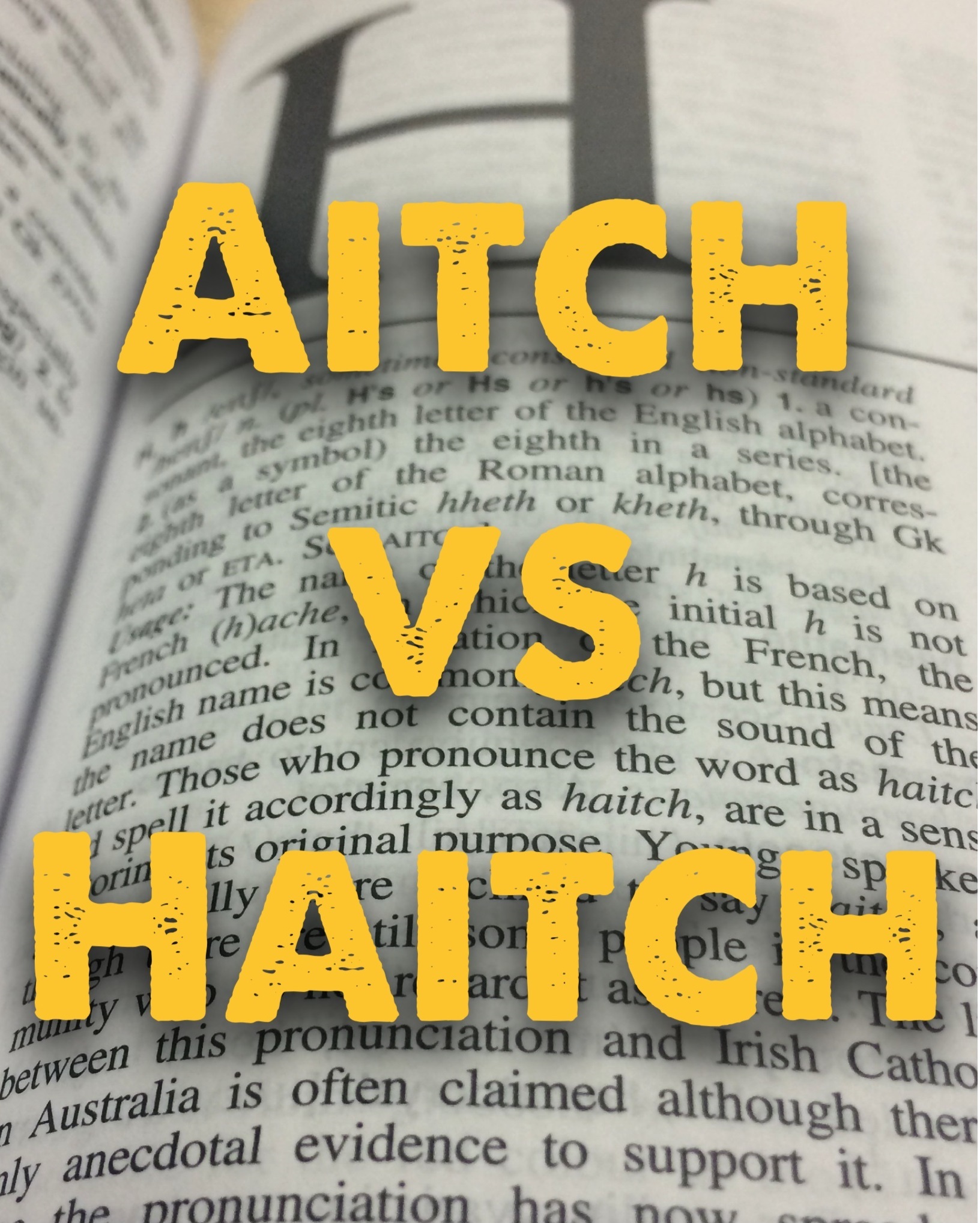 Battle-weary though we all are, we must face up to the problem of aitch versus haitch yet again. Now I know that you have all instantly retreated to the trenches but come on out for a minute and consider the situation calmly.

For various historical reasons we have ended up with this variation in pronunciation. Those of you who say aitch would do well to bear in mind that an accident of linguistic change has meant that the Latin ha – the name for the letter which illustrated the aspiration – has been altered by degrees through aha to ache to aitch – a name that no longer illustrates aspiration.

The attempt to return the aspiration to the name is logical enough. Any child learning the alphabet understands that a is for ‘apple’ and b is for ‘bat’. This is a good starting point for capturing the sound of letters, although already quite a lot has been glossed over in the creation of letter-to-sound equivalences. It is intuitively more logical to relate the name of the letter h to the aspirated rather than the unaspirated form. That is to say, h is for ‘hat’ rather than ‘hour’. ‘Haitch is for “hat”,’ the child says. ‘No! No! No!,’ we all yell. ‘You must never, never say haitch. Aitch is for “hat”.’ It doesn’t add up but the parental pain is evident so the children add that to the list of extraordinary and pointless things they are supposed to say and do while their parents are around.

Parents know that if their children pick their noses, neglect their teeth, say haitch instead of aitch, they will never make it in the world. It’s as simple as that. Haitch is logical but not socially acceptable. Again history plays its part.

It is remarkable that we fix on some idiosyncrasies of language as markers of the decline of Western civilisation, while others we are prepared to tolerate as acceptable variation. Of course, once such a pronouncement becomes entrenched in the language standards taught in school, then the chances of the proscribed item ever being accepted are strongly diminished.

Why can’t we regard this as a case of variant forms, as we do with ‘schedule’ (skedjool or shedjool) or ‘harass’? Why does it create so much unnecessary heat? That it is one of the things our parents and teachers dinned into us at school is something we ought to be able to regard dispassionately in our adult assessment of the relative importance of the bits of learning we acquired as part of our education.

Is it rather that we are reluctant to give up what seems so simple and obvious a proof of our own superiority?

People have fought wars because they felt superior to others. No one has done it yet on the basis of haitch, but it still remains an unnecessary social divider. You say to-ma-to, I say to-may-to. You say haitch, I say aitch. Let’s be tolerant of our little differences in language as in everything else.

In any case, the debate may roll over all of us because the young are endorsing haitch in ever-increasing numbers. Gender and social background no longer seem to have any bearing on the matter. It is in widespread use.

(This is an extract from Susan Butler's book The Aitch Factor.)

Do you say 'aitch' or 'haitch?

either of the two wil do, whatever is comfortable for the person pronouncing it.

I'm happy with Haitch - Irish ancestry, Catholic School...but living overseas I find I have to aitch my surname so that people recognize it.

Definitely aitch. If we start haitch-ing our aitches, we will have to start feff-ing our effs, and mem-ing our ems and so on.Besides, haitch sounds hawful!

'Eff' and 'em' still have the sounds associated with the letter attached, whereas 'aitch' really doesn't (unless you consider the predominant use of 'h' to be as 'ch', which is silly). 'Haitch', however, does.

'Eff' and 'em' still have the sounds associated with the letter attached, whereas 'aitch' really doesn't (unless you consider the predominant use of 'h' to be as 'ch', which is silly). 'Haitch', however, does.

I'm 20, have always lived in Queensland, and always said 'haitch'. I don't mind if you say 'aitch' as long as you don't mind how I say it :)

My name is Hannah, not Annah; I have insisted on saying 'haitch' since I learned my alphabet in the mid-90s.

Aitch is one of the consonants that are almost considered vowels (we use an in front of them) - y is the other.
This probably comes from the dialects of English that drop their aitches (and other letter) - e.g. in Yorkshire they say "ouse" not "House" and "t' not "to", "erb" not "herb".
So obviously they would say "aitch" not "Haitch"