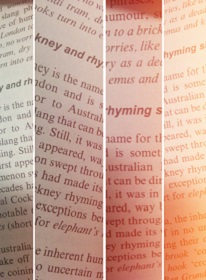 Rhyming slang, contrary to popular belief, was never a big part of the Cockney way of speaking. It was made to seem that way by the entertainment industry who created such characters as Alf Garnett and Arthur Daley whose habit of rhyming slang was part of their stage make-up. This form of word play can be traced back to British English of the 1700s and was probably a London phenomenon. It was usually playful in character rather than sinister, in that it was never a fully developed secret language of thieves but rather a humorous way for a community to share an in-joke, whether that community was thieves or traders or bookmakers at the races.

This kind of slang has two stages of development. Initially there is the full rhyme, for example, china plate for ‘mate’. Once people become familiar with the rhyme it can be shortened to the first word only, so china plate becomes china, as in ‘Me old china!’ This doesn’t always work for various reasons. I don’t believe that we reduce dead horse for ‘tomato sauce’ to dead, presumably because dead has so many meanings it would be confusing.

Rhyming slang can be used as a euphemism, as in Bristol cities or Bristols for ‘titties’. It can be used to convey an undercurrent of attitude, so you may be going home to the love and kisses or ‘missus’, or you may end up with the trouble and strife or ‘wife’. The phrase in the rude for ‘nude’ has both these functions.

We can often conclude that rhyming slang is dead only to discover that it has popped up again in a small community such as the local pub or the local club, often because there is one individual who has a flair for it. Some of the creations have stuck. China may be dated but dead horse seems to be a perennial, and we are coming up with new ones such as Barry Crocker for ‘shocker’, often abbreviated to barry as in ‘I’ve had a barry of a day’.

What rhyming slang do you use? Tell us in the comments below.