Wordnik: Portal to the brave new world of lexicography? 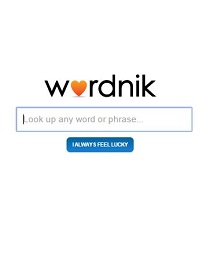 It is a source of great frustration to lexicographers that, especially in the case of colloquialisms, we can track a word back through a series of written examples of use, but then we reach a point where the word has obviously been current but we have no record of it. At a rough guess I would have said that, in the early days of the dictionary, any colloquial word existed in the spoken language up to ten years before it entered the written language. We dreamed idly of recording everything that every Australian ever said so that we could go past that dead end of the written text and get closer to the moment when a word was invented or acquired a new use.

Then the world changed. The internet has made it possible to get much closer to the spoken language, given that emails, posts, blogs and so on, are conversations conveyed in writing. It also allows lexicographers like me to roam through this verbiage at great speed to spot the items that are new.

Wordnik is the free-est, the most exhilarating of all word catchers because it skips lightly through the internet picking up new words with examples of their use. It then tries to fill in the rest of the dictionary entry where it can, acquiring definitions from online dictionaries which have recorded the word, and pronunciations and etymologies where it can find them.

So it is the case that some entries, quite a number of entries, will be a collection of example sentences (citations) from which the Wordnik user sorts out the meanings. Others have dictionary entries from one or more dictionaries.

This is a boon to other lexicographers but, for the average dictionary user who is used to having information about a word neatly packaged in a systematic way, it requires a bit of practice. In general, people are not used to being confronted by a set of citations and asked to work out the meaning for themselves. There is still a lingering sense in which the dictionary acts as an arbiter of what is true and what is best, and, however linguists might feel about this, the fact remains that there is the expectation that the dictionary will tell the user what is what.

There is also a slight uneasiness for the user in deciding whose English Wordnik is presenting. In the main it is American English, determined mostly by the collection of American dictionaries which are the source of definitions, but we are never quite sure. There is a British English dictionary as well.

Is that really a word?

There is also a rethink required about what makes a ‘word’ suitable to be in the dictionary. We can easily see that the family word invented by one of the children which is now being used by all the family is not in the same category as the word that is a staple of our vocabulary. But is it any less valid a word for not having the same frequency?

Editors of print dictionaries have found it necessary to be ruthless in culling sets of words which can be argued not to count as ‘words’ because they are limited by space. So we have all acquired this mindset – that some words are legitimate and important and ‘real’ and others are flim-flam.

Wordnik says bravely that they are all words and that it is better to have some information about them than to have none.

I quite agree. But I also see that this is a very different kind of language reference work and that most people will still want the dictionary that, without necessarily laying down the law, will give some guidance in a clear and economical fashion, on what they might elect to write.

What do you think? Tell us in the comments section below.
(Image from www.wordnik.com)