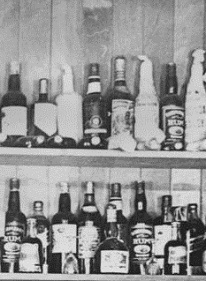 I have been talking to children at Hillston Central School in the Riverina about Australian English and the OzPic project. As an entertaining snippet about Australian English, I told them the folklore about the Australian accent. We sound the way we do because in the early days of the colony no one could open their mouths very far because the flies would get in. Another explanation is that the settlers and convicts found so much dust and pollen in the air that they had constant hay fever, and so spoke with blocked up noses. I got the laugh I was looking for.

Now I can add the theory that the convicts were permanently drunk and so their speech became permanently slurred. This idea was expounded by a vocal artist, voice coach and lecturer, Dean Frenkel, who achieved considerable media coverage as a result. The notion of the origin of the Australian accent was part of a general lament on the inability of Australians to communicate in anything approaching a convincing style.

I leave it to the phoneticians and historians in Australia to put the ‘drunken accent’ theory to rest. As far as our ability to communicate in public is concerned, I think that the situation used to be as Frenkel describes it, but that a great deal has changed in our classrooms to promote public speaking. Most schoolchildren that I encounter now impress me with their ability to speak in class, run assemblies, and address the community at large. I am, however, dismayed by the attack on the Australian accent. I thought we had left that kind of cultural cringe behind.

Tell us what you think in the comments section below.

Further reading: Australia, we need to talk about the way we speak | The Age | Dean Frenkel

Listen: Is there a problem with the way Australians speak? | ABC RN | Interview with Dean Frenkel

I am not sure that I agree that the drunken accent idea falls into the category of 'cultural cringe' - and I also don't see it as an 'attack'. Rather I view your comments as those of an 'Aussie victim', where you're looking for a way to distance yourself from your cultural past. I cannot say for sure, indeed you may be right, but it sounds like the idea should be examined as a possibility before shrugging it off in the dismissive way that you try to here.
I will add that I recently worked in a large establishment in Sydney which had only five years before I arrived there gone through a huge cultural shift to stop drunkenness in the workplace. According to those who worked there before that time, most employees would have been drunk by mid-morning and accidents were commonplace as a result. So to me this idea has some credibility.