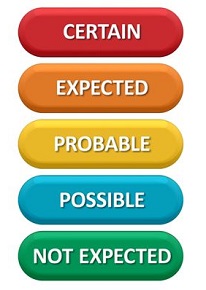 The trouble is that in general use, these words overlap in meaning. Possible has one definition along the lines given above but it has another that is the equivalent of probable. The first definition states that something can happen but makes no assessment of its likelihood. A simple statement of capability. But the second says that something can happen and is likely, and at that point possible is a synonym for probable. If you were asked ‘Are you going to the beach tomorrow?’ You could say ‘It’s quite possible’ or ‘It’s quite probable’ or ‘I expect so’, all of these responses meaning that you intend to go but are not quite sure yet. The boundaries between these words in general use are not clear-cut.

There is also the difficulty that words can work in a hierarchy like this where their meanings are apparent in relation to each other, but then not function very well on their own. The warnings will have to say ‘The threat is probable – remember that’s above possible and below expected’. On its own probable could mean anything. We are used to the low – medium – high hierarchy so if someone says medium danger we can fill in what comes above and below it. But this set is unfamiliar and difficult.

The colours are the most successful aspect of the new system. Red shading through to green. My response to these was simple and what was intended. But expected, probable, possible? If I hear any of these I’m heading for the hills.