What does it all mean? 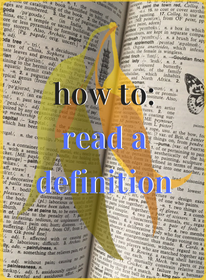 Many words have more than one definition, and these are listed in each entry numerically. But is there any order to this or is it organised chaos? In this case, thankfully, there are specific rules for how definitions are ordered. In a word such as joke or kangaroo or any word where there are multiple meanings, the following applies.

First, the definitions are ordered in terms of part of speech, starting with nouns, adjectives and verbs, however this also depends on which definition is more common.

Second, definitions are grouped under these parts of speech, with the central, or most common meaning of each part of speech put first. So for kangaroo, the first definition is:

noun 1.  any of the largest members of the family Macropodidae, herbivorous marsupials of the Australian region, with powerful hind legs developed for leaping, a sturdy tail serving as a support and balance, a small head, and very short forelimbs. The recognised kangaroo types are:

In some cases in which two definitions are very closely related, usually within the same field of information, they are marked with bold face letters of the alphabet under the same definition number.

The following definitions are in the usual order of: figurative or transferred meanings, specialised meanings, obsolete, archaic or rare meanings. That said, the order is broken where, for example, it is desirable to group related meanings together.

–verb (t) 3. Colloquial to release the clutch pedal of (a motor vehicle) unevenly so that the car moves forward in a series of jerks.

–verb (i) Colloquial 4.  (of a vehicle) to move forward in a jerky manner.

5.  to squat over a toilet seat, while avoiding contact with it.

–phrase 6. have kangaroos (loose) in the top paddock, to be crazy.

Try looking up pigeon, worm, lunch and balloon to see what other meanings there might be. Have a look through some of your favourite words and tell us what zany, odd and interesting meanings you find. We'd love to know what you find out.