What's your Word of the Year? 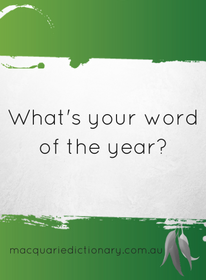 Here at Macquarie Dictionary, we like to let the year end completely before we make a decision on which word to crown Word of the Year. We have a basic policy that all the candidates are drawn from words which have been selected and researched and written into the dictionary during the year, so there is no doubt that our words are real words and have been accepted into the dictionary in the year in question. So, rather than a word that may have re-entered common dialogue, we choose from new words or definitions that have been coined throughout the year.

We will be announcing our Word of the Year soon, but in the meantime, let's have a look at some of the other words that have been named around the world.

Bringing it down again is Dictionary.com's Word of the Year which is xenophobia. Brexit defined the year for the Collins Dictionary and paranoid for the Cambridge Dictionary, Along with these, post-truth, alt-right, fake news and all the other politically-inclined neologisms to spring out of 2016, it's bound to be an interesting ride to see what we decide as ours.

But what about the other Australian Word of the Year? The word crowned by the Australian National Dictionary Centre is democracy sausage. Here is another political word (though a good deal more entertaining, light and fluffy) and another word that entered the Macquarie Dictionary in 2016, so another contender for our shortlist. It's also refreshing to see a fun, enjoyable, quintessentially Aussie word make it to the top.

I dislike the juxtaposition of democracy and sausage ; like the person it is ascribed to it is meaningless and therefore lacking in integrity.