Macquarie Dictionary Word of the Year 2016 in the news 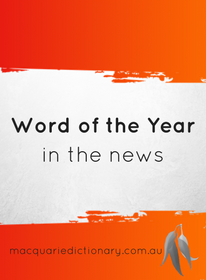 Decidedly less delicious, but no less real: “fake news” has beaten out “halal snack pack” to be named Macquarie Dictionary’s word of the year for 2016.

How far the humble combination of meat, chips, sauce, cheese and styrofoam packaging has come. A year ago, few would have heard of a halal snack pack, but now the new kebab shop favourite has been named one of the words of the year by Macquarie Dictionary.

The impact of the US presidential campaign and the prominence of social media has spilled over into the English language, with Macquarie Dictionary choosing 'fake news' as its word of the year.

"Fake news" of course is more than one word, and Ms Butler explained they had to adopt "normal speak" and classify the shortlist contenders as words. Anything considered a lexical item can be nominated, so multi-word phrases are allowed.

Macquarie Dictionary announces its Word of the Year | Nine News

Macquarie Dictionary has named “fake news” its 2016 Word of the Year. The term shot to prominence during the US election and was widely credited with influencing the election of Donald Trump.

Because everything is awful, 'fake news' is 2016's Word of the Year | Mashable Australia

After a conspiracy theory about Hillary Clinton running a child sex ring inside a Washington D.C. restaurant resulted in a North Carolina man taking a gun in to "investigate," it seemed inevitable that "fake news" would define 2016. And now it's official, with the word being chosen as Macquarie Dictionary's word of the year. If you don't laugh, you might cry.

Because we truly deserve nothing more, our very own Macquarie Dictionary has picked 'fake news' as its choice for word of the year for 2016.

The Macquarie Dictionary committee has chosen “fake news” out of a list of 15 category winners, including ‘halal snack pack’, ‘enby’ and ‘fatberg’.

The Macquarie Dictionary’s defines fake news as: “Disinformation and hoaxes published on websites for political purposes or to drive web traffic; the incorrect information being passed along by social media”.

It's meaty, cheesy, and incredibly saucy, and it was the word on everyone's lips in 2016. Last year was a momentous one for the halal snack pack.

YOU might not have tried a halal snack pack yet but chances are you heard the phrase more than a few times in 2016. And according to Macquarie Dictionary, it’s the “people’s choice” word of 2016. Dictionary editor Susan Butler said out of 15 words, the popular vote went straight to “halal snack pack” by quite a margin.

It's perhaps an unlikely platform for political debate, but this year the dish rocketed into Australia's national consciousness, becoming a symbol of peaceful multiculturalism for many, but for others, an unwelcome sign of the growing influence of Islam.

The people have spoken: The word of 2016 has been crowned. | Mammamia

Ah, 2016. The year of Donald Trump, the return of Pauline Hanson, celebrity deaths in droves, a new Star Wars installment and the rise of one beloved late-night street food which, as of Wednesday, has made its way into the 2016 edition of the Macquarie Dictionary.