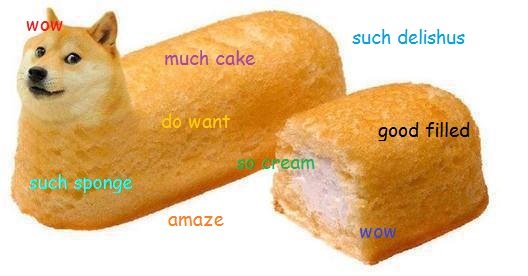 Catchphrases and internet memes have much in common – you can never tell when one of them is going to take off. Who would have thought that an ad from the Yellow Pages would have resulted in the catchphrase ‘Not happy Jan!’. Who would have thought that a cartoon character misspelling the word ‘dog’ would result in the Doge meme.  Like cartoon characters in the previous century, memes can appear on greeting cards, pyjamas, mugs, T-shirts, and so on. The meerkat with his catchphrase ‘Simples!’ is an example of the kind of internet creation that has pervaded our lives.

These running jokes are all ephemeral and yet pervasive. They share an oddball humour, not so much in their original use but in the twist that has been given to it. ‘For my next trick…’ was no doubt a standard part of a performer’s spiel. It becomes a catchphrase when it is linked with some monumental fuck-up.

The meme/catchphrase is first cousin to the snowclone, all three offering a certain open-endedness and flexibility that means that they can be applied to a variety of circumstances. If you are searching your memory for the meaning of snowclone, let me remind you: it is ‘a hackneyed phrase or expression that is overused and allows for adaptation to multiple uses, especially humorous ones’. It is derived from the common formulation ‘If Eskimos have N words for snow, X surely have Y words for Z’, and was coined by US correspondent Glen Whitman in 2004 in response to a request from British-American linguist for a word to describe this linguistic feature. The Eskimos and snow words equation has been adapted or cloned as a lead-in so many times that it is the type for this construction.

Of course the added dimension of the meme is that it is often visual as well as verbal. Not only do the words adapt but the image does as well, being morphed into a number of humorous forms. We need a word for this visual flexibility that matches the catchphrase and snowclone idea.

The final quality that these items share is the ability to travel at speed. It has always been the case that amusing or appealing or catchy expressions spread through a community apparently by osmosis. We all know ‘chateau cardboard’ as a well-established joke for cask wine. But at a more local level there is the ‘handbag’ and the ‘briefcase’, each with the name of the town or suburb in front of it. Thus is born the ‘Dapto briefcase’ and the ‘Coraki red handbag’. This joke has travelled around Australia. Of course the speed at which a similar exchange is done online is incomparable.

No doubt the study of catchphrases (and the many popular reference titles it produced) will be replaced by memetics (packaged and analysed ebooks of memes and their meaning). It sounds like fun  ̶  I think I will pack my bags and become a memeticist without delay.

This was originally posted on the Momentum Books blog.